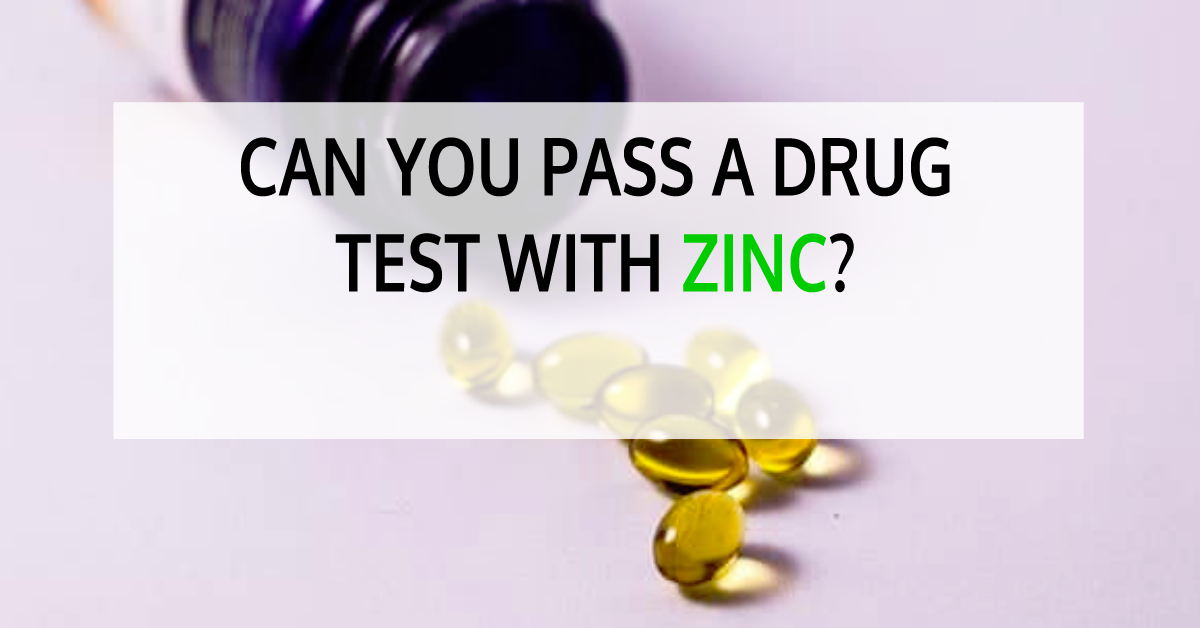 Yes. There are a lot of scientific studies that prove that zinc can be used to pass a drug test. However, the question of how to use it to cause a false negative has been a serious bone of contention for close to a decade now.

Some researchers claim that zinc will interfere with the detection of drug metabolites only when used as an adulterant. On the other hand, a recent study suggests that ingesting zinc supplements can also work the magic.

So, let’s get to the bottom of this. How can you use zinc to pass a drug test?

If you are looking for a legal and safe solution to pass, read this article: How to Pass a Drug Test in 24 Hours. Home Remedies

How Does Zinc Cause A False-Negative In Urine Tests?

To make it easy for you to understand the sections below, we thought it would be imperative if you understood how zinc works in urine tests first.

There have been a lot of arguments that try to explain how this trace element causes a false negative in drug tests.

Sources that advocate for the ingestion method claim that when consumed, zinc binds with the THC metabolites in your system to create a large molecule. They say that the resulting molecule cannot be filtered through the kidneys and it’s, therefore, excreted through the feces.

Look at it this way. The glomerulus (the key structure that is involved with filtration in the kidneys) has a maximum molecular weight filtration of 5000 Daltons (1 Da is equivalent to 1 g/mol).

On the other hand, and without getting so deep into chemistry, zinc sulfate has a molar mass of 161.47 g/mol while a molecule of THC metabolite has a mass of 344.45 g/mol−1.

Simple math will tell you that even if these two combined, the resultant compound would still be way too small and only a fraction of what the kidneys can filter.

The second myth suggests that when ingested, zinc masks the THC metabolites making them invisible during the test.

This is not true also. Most of the recent studies that we have referred to in this article confirm that zinc interacts with the tests themselves and has nothing to do with the metabolites.

However, it’s worth noting that zinc only interferes with cheap tests that rely on the immunoassay method. It won’t interfere with the performance of GC-MS (Gas Chromatography-Mass Spectrometry) tests.

Luckily, most labs will only resort to the GC-MS screening method as a way of confirmation and quantification in case the results come out positive for any drug. This means that if you are lucky to circumvent the immunoassay test, you’ll be on the safer side since no confirmative tests are done.

A 2011 study published in the Journal of Analytical Toxicology aimed at determining whether zinc is capable of reducing the detection of several common drugs; cocaine, THC, and methamphetamine by Elisa Urine Testing.

In this test, four volunteers consumed 0.75-1 g of cannabis. They later ingested four 50-mg tablets of a zinc sulfate supplement and their urine specimens collected.

To determine the effect of zinc sulfate when used as an adulterant, the researchers also obtained drug-free urine from 3 healthy volunteers and split it into 2 separate tubes. Zinc sulfate solution was added to one tube, and the pH was measured before conducting the analysis.

The investigators concluded that zinc ion could help in causing a false negative in a urine drug test. The researchers also reported that that zinc gives similar effects irrespective of the mode by which they made zinc sulfate present in the urine (ingestion or direct addition).

Other important observations that were made were that;

According to this study, both ingestion and direct addition of zinc sulfate into the urine sample will do. Of course, ingestion seems the best way to go since you can do it freely at home before heading to the collection point. You’ll agree with me that it is much easier than adding several tablets into the urine before handing it over to the lab technician for analysis.

Again, as the researchers concluded, ingesting a zinc supplement does not add turgidity to the specimen which may raise some eyebrows.

But Is The Ingestion Method Reliable?

Well, the latest in-depth study (2013) around the same issue seems to oppose this. The researchers from the University of Utah concluded that true to the previous study’s findings; zinc does interfere with EMIT-based testing.

However, this study is at loggerheads with the claims that ingesting a zinc supplement could help in thwarting test results.

According to these researchers, the concentration of zinc in urine after ingesting a supplement is way below the level that is required to interfere with the test.

The only issue that we have with this second experiment is that the subjects did not actually ingest cannabis. And this makes it more theoretical than factual.

We have very little evidence supporting the claim that ingesting zinc sulfate supplements might help in cheating a urine drug test.

How Much Zinc Should You Add To The Urine Sample?

So far, the use of zinc sulfate as an adulterant seems safer than the ingestion method. This begs the question, ‘‘how much should you add to the urine for successful adulteration?’’

However, going by the 2011 study, it was found out that where the zinc concentration was 25 mg/mL and higher, there was a decrease in absorbance as well as a substantial change in pH in the urine specimen.

Is Zinc Detectable In Urine?

At the time of the 2 studies above, the researchers stated that there were no known ways of detecting zinc when used as an adulterant in a urine test.

But a recent study indicates that today, zinc sulfate can be detected via the novel spot tests that have since been developed.

Also, it’s important to remember that when zinc sulfate is added directly to a urine sample, it causes a white precipitate that is slightly detectable.

Importantly, according to the SAMSHA guidelines, an abnormal color in urine is a telltale of adulteration. Perhaps the saving grace here is that turbidity in urine samples may arise from several factors.

Therefore, the slight change in color is less likely to raise eyebrows unless there is abnormal foaming which is only associated with detergents.

Moreover, most laboratories today still don’t test for zinc even with the availability of novel spot tests that may help with that.

It’s Unreliable And Not Worth The Risk

It’s undeniable that zinc can successfully be used to cause false-negatives in ELISA and Emit-based tests. Zinc sulfate has been found to interfere with the performance of the tests thereby leading to a false-negative.

However, it’s clear that self-administering zinc does not yield enough zinc concentration in the urine to thwart the results. Ingesting 400 mg of a zinc supplement was found to double the zinc levels in urine. Unfortunately, the new concentration, 50 ug/dL (0.0005 mg/mL), was still approximately 5000 folds less and way below the amount that is thought to cause assay interference.

This leaves adulteration as the only slightly viable method here. But this also comes with its bag of challenges and risks considering that you’ll need to understand the level of drug metabolites in your urine to determine the right dosage. All these hassles make the use of zinc to cheat a urine test quite unreliable.

Adding several pills of zinc directly into the urine sample can help in passing a drug test. However, although most labs today don’t test for zinc, this adulterant can be easily detected today.

Where abstinence won’t help, the dilution method remains the most reliable way of circumventing a possible FAIL in a urine drug test.

The best part about this method is that it does not affect essential urine values such as pH and creatinine and specific levels. It’s also inexpensive and can be used as a detoxification regimen as well as a same-day solution.