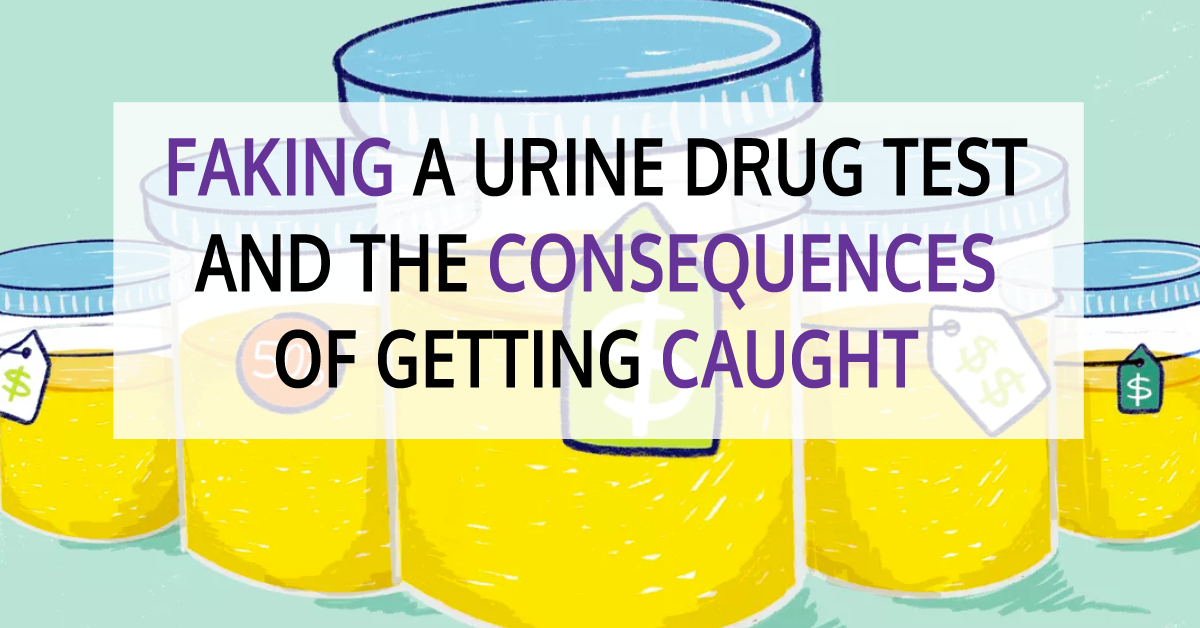 If you are thinking about the worst things that could happen in terms of faking a drug test, you certainly aren’t alone, and we’re sorry to say that you are most likely going to be disappointed with what you find.

Many states hold the falsifying of evidence as an offense of federal law. When you look at all the tips and tricks online that tell you how to pass a drug test when drugs are still in your system, is the risk worth the reward?

You could even find companies marketing potions and pills that claim to be 100% foolproof.

If you’re caught, however, the consequences may be more life-altering than simply a positive test result.

It’s a crime if you falsify a drug test and there are even some serious consequences when you do it.

If a test is faked for reasons of employment, it’s mostly in the hands of the employer in terms of how they want to take care of the matter.

A fair employer might think about the possible reasons for a faked test like the need for prescription medications if the individual has a disease or illness.

They could also ask about retesting to see whether the faked returns would have been a positive or negative result or not.

The second batch of results will be taken into account – if a retest is decided upon. When they turn out to be positive, that would be enough for immediate dismissal.

If the results are negative, the employer may take other disciplinary actions against a worker like a warning or a suspension.

An employer might terminate an employee right after they are caught cheating on a drug screening.

They are within their legal rights in doing so – mostly because the employee has violated the law.

Your employer might consult with the police in certain cases. The worker would then be arrested for faking a drug screening.

The employer would also need to offer up the evidence of a crime being committed to the police for the worker to be hit with a falsification charge.

The business could also put down a charge against a worker at the police station regarding fabricating a blood test — this also would result in an arrest.

Why Do People Need To Tested For Drugs Anyway?

Those who need to take drug tests could be doing so for any reason — including:

The Charges Of Being Found With A Faked Drug Test

When an employee is charged as guilty for criminal actions of this sort, they would potentially be facing sentencing of up to 6 months in jail — including penalties of up to $2,000.

The penalties will vary from each state, however. Offenders who go on to commit the same crime can face more serious charges of time in prison and fines.

People who deliver or manufacture devices or substances to cheat a test could be facing higher punishments — primarily a Class A Misdemeanour that is followed by up to one year in jail as well as up to $4,000 in fines.

The charges and arrest will go under the employee’s criminal record for life, making it harder to become employed down the road.

It can also impact the possibilities of applying for a rental or credit.

It’s not mandatory to have been found cheating a drug screening in some cases.

Being caught in possession of a fake urine sampling device is enough to be found guilty of a crime because it confirms intent to commit a crime. The penalties could be potentially less severe in this situation.

Consequences Of Cheating On Drug Tests By State

In states like Texas, the Health and Safety Code classifies an attempt at cheating a drug test as a crime. No matter your reasoning, it’s a criminal act to fake evidence intentionally or knowingly.

The law says that manufacturing, using or having any substance or device in your possession that’s meant or designed to fake a drug test is culpable.

Keep in mind that drug tests are lawfully authorized methods of identifying traces of controlled substances like marijuana in your system.

The state of Arizona requires employer’s to make use of drug testing policies, but employees have to be notified before drug tests are ordered.

When you’re hit with a spontaneous drug test, it’s tempting to try to be creative in falsifying evidence.

We all know that depending on the strength of the cannabis you smoke, and when you smoke regularly, it can potentially remain in your system for roughly ten days to 2 months.

What If You Know You’re Going To Fail

If you plan on taking a drug test for your work or the military/probation reasons and are concerned about cannabis getting detected, it’s usually best, to tell the truth to the person supervising you before any tests are taken.

This is ultimately better than undergoing an expensive drug analysis that you might not show up clean on.