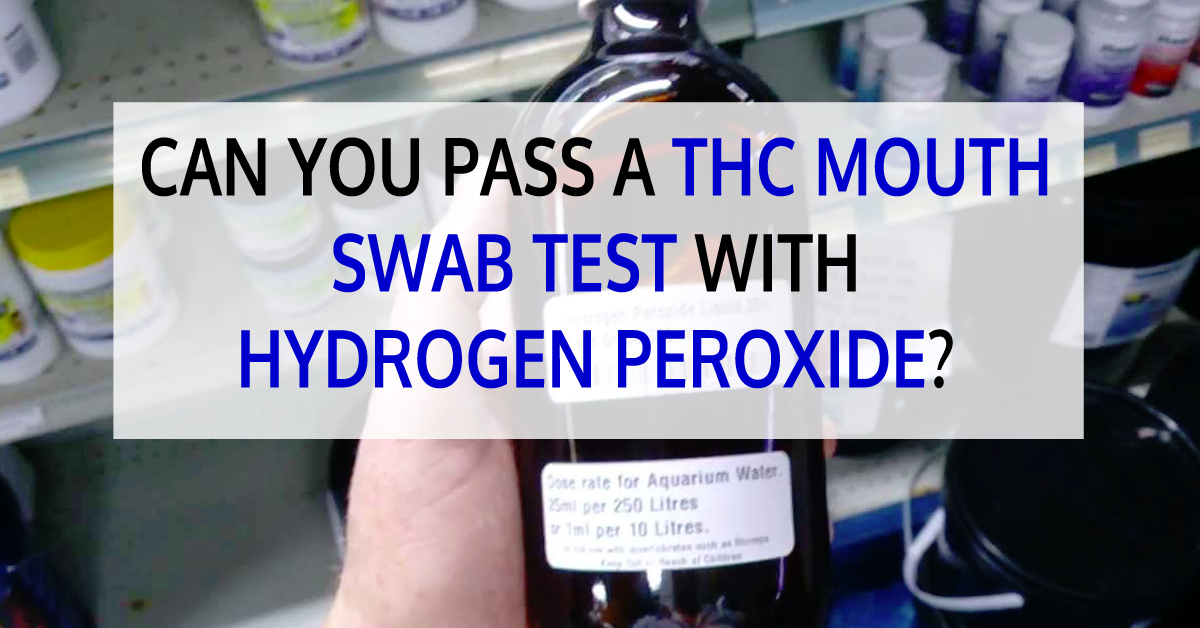 Hydrogen Peroxide has been touted as a remedy for passing a mouth swab drug test.

Does it work? Sure.

Tons of scientific research proves that a solution of hydrogen peroxide does help in minimizing the THC in your saliva to below the detectable levels.

Considering the side effects of using too much hydrogen peroxide, we would advocate the use of water.

All in all here is how to use hydrogen peroxide to pass a saliva drug test and the scientific rationale behind its working.

Contrary to most people’s claims, a mouth swab drug test is not a modified urine test. These two tests screen for entirely different compounds.

In a urinalysis, the lab technician looks for THC-COOH also known as 11-COOH-THC.

This is the metabolite that is formed after the body has metabolized delta-9 THC in a bid to remove it through urine.

On the other hand, a saliva test is calibrated to detect delta-9 THC, the psychoactive compound that gets you HIGH.

A cannabis joint has millions of delta-9 THC.

This compound is massively found in the saliva almost immediately after consuming marijuana or hashish since it coats the entire surface of your mouth thereby showing up on the swab test.

On the contrary, it takes several hours for THC-COOH to reach detectable levels in the urine.

This is what makes it hard to beat a surprise saliva drug test especially if you’ve inhaled marijuana a couple of hours back.

Currently, most drug testing companies use a 25ng/ml cut-off when testing for the use of marijuana in saliva.

How Long Is THC Detectable In The Saliva

The good news for you is that THC does not stay for so long in your mouth. A study published on researchgate.net aimed at investigating how long THC takes in the saliva in the controlled administration of smoked cannabis.

In this experiment, the first specimen collected from one of the subjects showed a THC concentration of 5800ng/ml using a GC-MS test 12 minutes after smoking.

While the study above shows that the THC concentration in the saliva had fallen way below the detectable level within 12 hours, it’s worth noting that most saliva tests that the labs use today can detect marijuana in your saliva 48 hours after firing up a joint.

Therefore, if you want to skirt through the test, it pays to keep off weed for at least 48 hours (72 hours would be much better) to the test.

Can The THC Metabolites In Your System Be Diffused Back Into The Saliva?

Heavy and long-term smokers do fear the probability of THC seeping from their blood system back into the saliva even after abstaining for up to 72 hours.

Studies show that THC is sequestered in the cavities after consumption.

Fortunately, as the study above proves, the concentration declines with time as the THC molecules are absorbed into your blood system.

Also, while not much research has been done around this, it’s almost evident that THC never diffuses back into the saliva from the system.

Researchers doing an Analysis of Drugs in Saliva for the Federal Office of Road Safety noted that THC is so lipophilic. As such, it cannot be absorbed back into the saliva upon entering into the blood system.

This explains why a stoner will fail a blood or urine test but pass a saliva test provided he’s not inhaled or eaten cannabis in the last 48 hours.

On this note, it’s important to mention here that the presence of THC in the saliva shows that the individual has used cannabis in the recent past.

It’s for this reason that the mouth swab drug test is commonly used by employers, companies, and road safety enforcers who want to minimize the risk of accidents at the workplace or on the roads caused by smoking at work and when driving.

Can You Pass A Saliva Test Using Hydrogen Peroxide?

Yes. It’s very much possible. There are so many people who have used this technique to pass the test successfully.

While different online sources have varying ways of using this solution to beat a drug test, the version below is the most commonly used.

How To Pass A Mouth Swab Test Using Hydrogen Peroxide

Step 1: Abstain From Cannabis For At Least 48 Hours

As we have just told you, the detection window for THC in your saliva is 24-48 hours.

That being said, the first thing that you want to do is to keep off ganja at least two days before the test.

Abstaining for a longer time, let’s say 72+ hours ups your odds of beating the test especially if you are an everyday weed-lover.

After consuming marijuana, millions of the THC molecules are left lingering all over the surface of your mouth.

Some find their way into your oral cavities and are either released into your saliva or absorbed into the blood.

Therefore, the trick is to get rid of these molecules as fast as possible.

One sure way of doing this is to eat, drink, and brush a lot during the days leading to the test.

Doing this keeps the fluids in your mouth moving thereby boosting the removal of the THC molecules that are stuck on your mouth surface and in the cavities.

You could also rinse with mouthwash. But you’ll need this on the day of the test.

On the day of the test, you want to focus all your energy on brushing your entire mouth as you’ll never do it again.

This is your last shot to remove even the minutest THC molecule that might have evaded the brush since you started preparing for the test.

So brush that tongue and the gum line as if your life depends on it.

As you continue invading the leftover THC molecules in the saliva, swish a solution of hydrogen peroxide or Listerine vigorously in your mouth 3-4 times to help you get rid of more molecules.

Sure, this will burn and sting your gums like hell but that’s just one of the ‘perks’ that come with this method.

So, man up if you really need to pass that test.

Step 5: Head To The Test Venue

You should be certain that lots and lots of THC molecules have been removed from the saliva by now.

Don’t be so sure though. As you head to the test venue, take along a travel-size mouthwash and a bottle of water.

Gargle one last time some minutes before you are ushered into the collection point and drink lots of water.

A 2014 study published in the Journal of National Institutes of Health aimed at assessing the effects of different mouthwashes on cannabis oral fluid concentrations.

At the end of the study, the researchers observed two key things.

First, regardless of the type of mouthwash used, the THC concentration in the mouth was 3-fold higher than the 25ng/ml cut-off mark used by the Spanish police 15 minutes after inhaling marijuana.

This clearly explains why you need to abstain for at least two days before the test.

Second, the researchers noted statistically lower concentrations after the subjects rinsed their mouths with water than with other mouthwashes.

It’s true that hydrogen peroxide can save the day if you are warned about an oncoming saliva drug test.

However, as the study above proves, water yields the same results.

Therefore, if you don’t want to subject your gums and tongue to the stinging effect of hydrogen peroxide, water is a good way to go.

Besides, water will also save you some bucks.